This episode features Ai-jen Poo, Director of the National Domestic Workers Alliance, and Sarita Gupta, who co-directs Caring Across Generations with Ai-jen. These powerhouse activists lay out an agenda that addresses the lack of a comprehensive and coherent caregiving policy in the U.S. They also share their own challenges they’ve faced caring for elders in their families, as well as juggling caring for parents and a child, in Sarita’s case. We also have a “teaser” from Rick Surpin, who is featured in Episode 3. Rick founded Cooperative Home Care Associates, the first worker-owned home care agency, based in NYC.
View Transcript Ai-jen Poo is the Director of the National Domestic Workers Alliance and the Co-Director of Caring Across Generations with Sarita Gupta, , a national movement aimed at transforming the way we care in this country. She is an award-winning organizer, author, and social innovator, and a leading voice in leading voice in future of work and family care solutions. Ai-jen is a 2014 MacArthur “genius” Fellow, TIME 100 alumna and recently featured speaker at TEDWomen. She has been an influential voice in the #MeToo movement and joined Times Up at the 2018 Golden Globes. Her work has been featured in The New York Times, Washington Post, TIME and CNN.com. She is author of The Age of Dignity: Preparing for the Elder Boom in a Changing America. Follow her at @aijenpoo.

My first job in Boston was working for a progressive Senator named Jack Backman who represented parts of Boston and Brookline in Massachusetts. Jack was the the Senate Chair of the Children, Families and Elder Services Committee, and my job was focused on child and family policy. Jack was a fiery character. For people who agreed with him, he was a hero. For people who disagreed with him, he was a giant headache, because he didn’t give up. But that’s what I loved about him.

In 1980, Jack sponsored a Universal Child Care bill. At the time, this bill seemed outrageous, the kind of outrageous that inspired behind-his-back twitters (the old-fashioned, non-techy kind).  But I have learned that in the world of policy, we “NEED outrageous” to push the debate towards the possible..

At the time I was doing this work, the then-Governor called childcare a “Cadillac service”, in other words, something superfluous – because women were expected to be primary caregivers for their children. But even then, 30 years ago, this view was way out of sync with the reality of women in the labor force, and especially the rise of mothers – about one-half with infants and three-quarters with children under 5 – who continued to work for pay after their babies were born. I left the State House and my job with Jack Backman after one year, but continued my policy career for many years.

I have an enormous appreciation for the policy and activist work Ai-jen and Sarita are doing through Caring Across Generations. They work on a number of policy fronts, but with the same goal – to mobilize people around a progressive caregiving agenda.  To that end, they’re working to pass an initiative on comprehensive family leave policy; and another initiative focuses on supporting human rights for migrants, and to end militarization at the border.

Mobilizing people around a policy agenda is hard work.  It involves researching the impact of current policy; educating people about the problems with current policy; developing and articulating creative solutions for change; and helping people understand how laws get passed, so they know how they can contribute to that process.

To find out more about Ai-jen and Sarita’s work:

Check out this clip from a PBS program featuring Ai-jen and Sarita – as well as other resources on this page, including articles and videos of these powerful activists who are committed to addressing care needs of families and creating a stable care workforce Sarita Gupta is the Director of the Ford Foundation’s Future of Work(ers) program. She is also the co-director, with Ai-jen Poo, of Caring Across Generations. Sarita is a nationally recognized expert on the economic, labor, and political issues affecting working people across all industries, particularly women and people employed in low-wage sectors, and on issues related to home care. As a member of the “sandwich generation,” Sarita is grappling with and can speak to the care issues facing more and more Americans, balancing caring for young children with caring for aging parents. Sarita has appeared in The Wall Street Journal, Bloomberg, and Politico, as well as on MSNBC, Al Jazeera America, PBS, CNBC, and Fox. She writes regularly for The Huffington Post, The Hill, and BillMoyers.com and is a key leader and strategist in the progressive, labor, economic justice, and women’s movements. 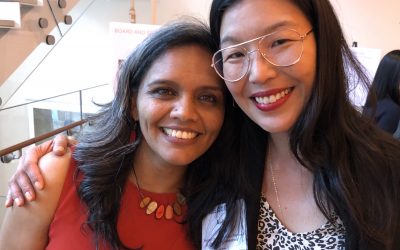